It is well known that the primary causes of death among Japanese people are cancer, coronary disease and cerebrovascular disease. Since most cases of coronary disease and cerebrovascular disease are caused by thrombosis, the prevention of thrombosis is critical. Thromboses can be divided into two main types – venous thrombosis and arterial thrombosis. Clotting factors and platelets play an important role in the formation of blood clots, in both veins with slow blood flow and arteries with fast blood flow, respectively. Common types of venous thrombosis include deep vein thrombosis and pulmonary embolism (so-called “economy-class syndrome”). Anti-coagulant drugs are the primary treatment and prevention strategy. Arterial thromboses include myocardial infarction and stroke, and are treated with anti-platelet drugs. In order to clarify how rhamnan sulfate prevents the formation of blood clots, we carried out blood coagulation tests and platelet aggregation tests.

After adding rhamnan sulfate to fetal bovine serum and then adding thrombin (a factor that coagulates blood), we measured the length of time until coagulation occurred. We also measured a sample to which phosphate buffered saline (PBS) and heparin (an anti-coagulant) were added as controls. Further, we examined the effects of rhamnan sulfate on inhibiting the aggregation of thrombin-induced platelets. 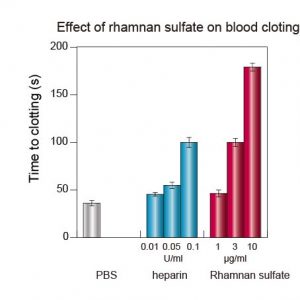 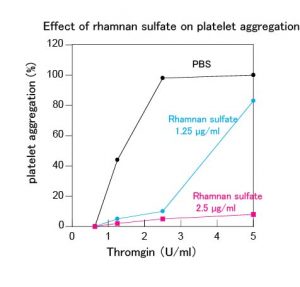 The results of this study suggest that rhamnan sulfate suppresses blood coagulation and platelet aggregation and is thus effective in inhibiting both the formation of venous and arterial thromboses.