Rhamnan sulfate is known to have an antiviral effect with respect to the AIDS virus, the herpes virus, and the cytomegalovirus (Lee JB, Hayashi K, Hayashi T, Sankawa U, Maeda M, Planta Med. 1999 65, pp. 439-41). Structurally, viruses can be divided into those that possess and those that do not possess envelopes. These envelopes consist of lipids and proteins, and when viruses are released from the host cells, they are equipped with the membranes of the host cells. In order to clarify the types of virus on which the antiviral properties of rhamnan sulfate are effective, we assessed its effect on 12 different types of viruses.

We prepared virus solutions and infected the cultured cells that would host the viruses, under the following conditions:

After culturing for 24 hours, to investigate the number of viruses that had propagated after the host cells had been infected, we disrupted the cell membrane of the host cells and assessed the number of viruses using the plaque assay (a method for measuring number of viruses). Various concentrations of rhamnan sulfate were added, and we sought the half-maximal viral proliferation-inhibitory concentration (IC50). The lower the IC50, the greater is the strength of inhibitory activity. In the case of method A, rhamnan sulfate was present from the moment when the virus adsorbed and invaded the cells; whereas in the case of method B, it was added after viral adsorption in the cells.

Rhamnan sulfate possesses a strong viral proliferation-inhibitory effect against viruses with envelopes, but it became clear that there is almost no antiviral effect against viruses without envelopes. Regardless of the type of envelope possessed by a virus, method A, in which rhamnan sulfate was added at the same time as the infection with the virus, resulted in a stronger inhibitory effect. 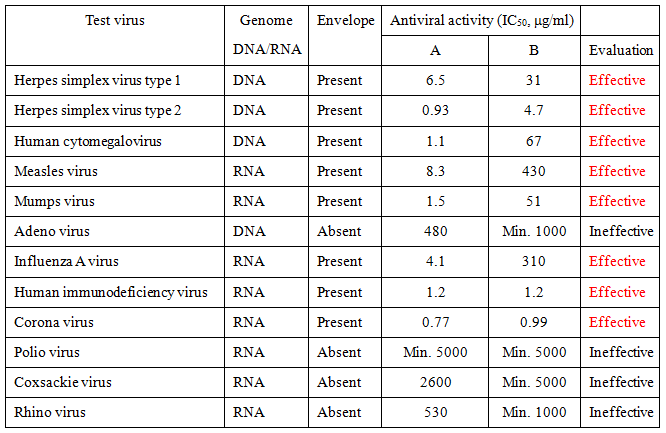 Rhamnan sulfate is more effective when added at the same time as the infection rather than when added later, and it seems to be particularly effective at the initial stage of host-cell infection. These results suggested that it is effective in inhibiting infection owing to its ability to block adsorption of the virus on cell membranes.

Amount of influenza virus in the lungs

Rhamnan sulfate was administered to the mice infected with the influenza virus, and we discovered a significant decrease in the amount of virus in their lungs, in comparison with the mice to which only water had been administered.

Amount of influenza A-type antibodies in the blood 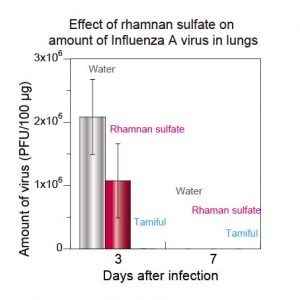 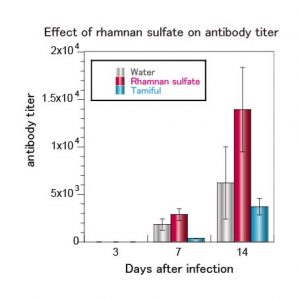 Due to its immunostimulatory effect, rhamnan sulfate generates a large quantity of antibodies against the influenza A virus. The increase of antibodies may be considered effective in reducing the virus proliferation.